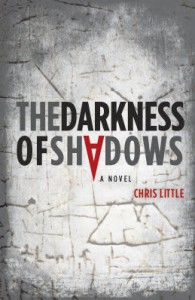 I received a copy of this book from NetGalley in exchange for an honest review.

I was extremely disappointed in The Darkness of Shadows. With such a promising blurb – Natalie wanting to kill her father before he hurts the family that took her in and then having to contend with magic powers she never knew he had – I thought this book was bound to be good. But I’m actually surprised I finished it.

Chris Little’s writing style and I didn’t get along all that well. I found the writing to be extremely choppy, and I HATED the dialogue. Natalie’s self-deprecating humour wasn’t endearing at all. In fact, it was extremely annoying, especially when she makes jokes about being a cripple all the time. I didn’t know whether I should laugh or be uncomfortable with the following gems:

Her perky voice shot through me like a bad burrito.

I towered over her like a sequoia over a delicate bonsai.

His mouth snapped shut like the front door on a Jehovah’s Witness.

It chilled me to my DNA.

My lungs stopped working, and they didn’t even give me two weeks’ notice.

She was like a pudding that hadn’t set as I buckled her in.

Aside from the awkward and choppy writing, I couldn’t stand the characters. Val, Natalie’s best friend, was alright. She was a kick-ass best friend who literally kicked ass for Natalie. But these women, unless I am mistaken, are supposed to be 32 years old. I can’t even think of one instance where they act like they’re 32. Sure, they both have successful businesses, but they talk to one another like they’re 16 and in high school.

I’m also pretty disappointed with the lack of psychology in the book. I think it would have been so much more interesting if Natalie both hated and loved her father at the same time. I’ve never been in an abusive situation, so I’m not expert on how abuse works. But, a lot of the time the abused party feels like he or she has done something wrong to warrant this abuse. If Natalie had felt something along these lines, even though she knows what her parents did to her was wrong, the story would have been much more compelling. And that ending. Seriously? Don’t you think that if you had been trying to capture/kill someone for an entire book that you WOULDN’T warn him that the FBI is coming? So that he can run away and live to kill again? No. This is a total cop out so that the author can write a second book with the same boring/frustrating characters and the same plot.

Overall, I didn’t find this to be an enjoyable read in the least. Bad research, frustrating dialogue, and unlikeable characters = 1 star.