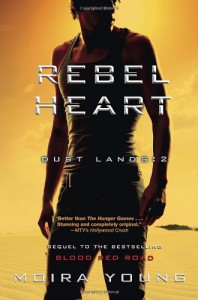 “What happens to you changes you. For good or ill, yer changed ferever. There aint no going back. No matter how many tears you cry.”

My heart hurts after finishing this book. Rebel Heart is a suspenseful and heart-wrenching read, and a fantastic follow up to its predecessor. Picking up where Blood Red Road left off, we journey with Saba through a desert like wasteland, where she contends with her haunting memories of what happened in the fight with the Tonton. Her adventures over the barren landscape continue on her quest to reunite with Jack, while her relationships with others continue to deteriorate.

For the entire first half of the novel, my heart was breaking for Saba. I can’t imagine the guilt she felt over the events at the end of Blood Red Road. Even when things started to turn around, and she was ‘healed’, I was still feeling for her and her dilemma. Can you tell I’m in love with her? I am. Her unwavering trust in Jack was beautiful to read about. Moira Young did a fantastic job of describing Saba’s feeling’s for Jack when they aren’t together without allowing it to overburden the story. My all time favourite quote was this beauty:

“Be with me Jack. Burn with me. Shine with me.”

So beautiful. I'm basically swooning. For Saba, there was none of the crap that a lot of female protagonists would have said in other YA novels. Nothing about her being unworthy for him, or about his sculpted muscles attracting her to him. This is why I LOVE them!

And…dare I say it…the love triangle was really well done, in my opinion. I will always hold a soft spot for Jack, because he is so wonderfully flawed, but so pure in his love for Saba. Even though his actions were questionable in this book, I still haven’t been able to let him go. Similarly, DeMalo’s actions are also debatable, yet Saba still feels something for him. While their relationship did feel a little rushed, I still enjoyed it a lot. It’s just so refreshing to have two male love interests who aren’t perfect and don’t require long descriptions of various sculpted and toned body parts to keep my interest.

As usual, the supporting cast was fantastic. I’m not going to name any names, because it will spoil the story if you know who survives until the end! But, let me just say one thing. I HATED Lugh. I found myself thinking, why the hell did Saba go through all this trouble to save that asshole. He was such a patronizing jerk throughout the story, and instead of helping Saba with her mental issues, he just made things worse. Ugh. And he treated his love interest badly as well. Not impressed Lugh!

I am just so impressed with Moira Young s writing. Not only does she manage to write in the hillbilly-like speech used by Saba and everyone else in the future, she still managed to make it hauntingly beautiful and descriptive. I think that’s pretty amazing. Young has the skill of describing something so simply that it’s beautiful. If that makes sense. Now I wish I had some examples…just go read it!

My only complaint was the plot. It was a little bit all over the place and discontinuous. But at least there was a plot! And silly subplots that we've already seen in Blood Red Road. But I don’t care because I love Saba. The book was still very fast-paced, and so good that I read it in one sitting. As if we’re forced to wait until 2014 for the third book! Randomhouse, why you so mean?