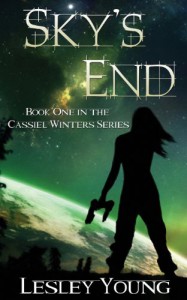 I don’t read a lot of science fiction, so I don’t have a lot to compare this to. Set in a future world, in which Earth has made contact with extraterrestrial life, Sky s End postulates what it would be like to have contact with aliens, both friendly and deadly. I automatically began comparing this book to one of my favourite childhood reads A Wrinkle in Time. You can tell how much sci-fi/alien books I’ve read. Anyway, this book is nothing like A Wrinkle in Time, but I felt like it had the potential to be just as good.

Cassiel Winters is one of few women training to be a part of the ESE (Earth Space Exploration), an agency dedicated to space travel, discovery, and protection of Earth. After failing her combat test for the first time, Cassiel is about to get a second chance. However, she didn’t join the ESE and move up to space to live in a space station for nothing. Cassiel’s brother has gone missing on a secret mission for the ESE, and she is determined to find out what happened to him. But she also has a secret; she has episodes called deju vu, where she has visions of things that have happened and things that are soon to happen. Nobody can know about her talent, or who knows what they’d do to her.

Sounds cool, right? I was really excited too. But sloppy writing, poor verb agreement and generally bad sentence structure pulled me down from the beginning. I tried very hard to look past it, but the writing style wasn’t able to make up for the errors. The book is written in first person, but the writing seems almost schizophrenic. Despite being written in first person, I feel like I don’t know very much about Cassiel aside from the following: her parents are dead, she wants to find her missing brother, and she has NO idea how to describe steamy make-out session. No seriously…check it out:

“His tongue –oh. He tastes so pure”

“I can’t believe he kissed me! It was …awesome”

“The heat from his body is welcome because the sun has moved, and a tree now shades our bodies”

NO. Not what I want. I’m sorry, but if I’m finally getting it on with the boy I’ve been in love with for years, I am not thinking that his body heat is welcome because the sun moved and I was cold. NO. Also, the dude is a total douche. King acts like Cassiel belongs to him (shocker!) and that he has a quest to be her protector. Their love is so…deep…ahem, that she even says this:

“I will never forget the way you say my name, the adoration you draw out of me like a sweet melody, how I would do anything to rise up and be worthy of your noble gaze”

But wait, what about sexy aliens!? Yes, there are some of those too. And guess what? They are the epitome of masculinity and sex on legs. Do you like long descriptions about bulging pectorals, broad shoulders, and perfectly molded six packs? Well then maybe this books is for you. I could only imagine this:

But lo and behold, turns out Cassiel isn’t so deeply and madly in love with King. Or as pure as she makes herself out to be. Suddenly she has this crazy libido and she doesn’t know what to do with it. In fact, her libido becomes so out of control that she even tries to seduce the alien commander, who just captured her from the ESE base and put her in this creepy shield thing. And shot at her. But he has a six pack and he’s such a lovely specimen!

Anyway, what you need to know is that I NEVER dnf books. Ever. This is my very first ever dnf. Even if I hate it, I still try and get to the end. Check my shelves! I’ve made it through some pretty awful books, including Hush Hush and Beautiful Disaster. But I just could not get through this one. Even though I kind of still want to know what happens. Loved the premise, didn’t love the writing, unfortunately.