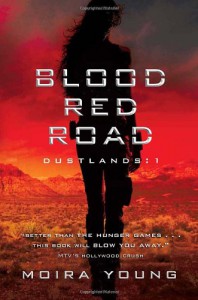 Book ADD has been plaguing me for the past week or so. I couldn’t find a single book that swept me away and took me to another world. I got so frustrated, I picked several books up, read partway through, and then put them down again. At first, Blood Red Road was one of these books. I couldn’t get past the writing, which was reminiscent of a particularly stupid teenager texting his/her friends with awful grammar.

For those of you who felt the same way in the first few Chapters, don’t stop reading! Once you get used to this type of writing, it’s a lot easier to read, and it is at this point that the plot really picks up and we get to experience Saba’s development as a character.

Unlike many other reviewers, I disliked the first bit of the book. It was difficult for me to sympathize with Saba, because I’ve thankfully never had the type of relationship she has with her sister with either of my siblings. But, once she warmed up to Emmi, even just a little, I enjoyed the story a lot more.

I really loved the characters in this book. Saba is a kick-ass heroine, reminiscent of Katniss in The Hunger Games. Her love for her brother, and eventual tolerance (view spoiler) for her sister, was touching. Her experiences throughout the book really challenge her and transform her by the end. However, she is still recognizable as the Saba we met at the beginning of the book. Her little sister, Emmi, was fantastic. She is one of the most determined characters I’ve ever met read about. The huge amount of adversity she had to overcome, and the awful things she experienced at such a young age didn’t affect her naiveté, but really made her one of the strongest characters. Neither of these two girls made apologies for who they were, and, like many others have pointed out, were able to be kick-ass without rejecting ‘gender norms’ like wearing dresses. Jack and Ike are two of my favourite male characters in post-apocalyptic literature. They both brought some much needed humour and flirtation to the story, which really lightened it up. Jack was very sweet, and I loved the dynamic of his and Saba’s relationship.

While I really enjoyed the plot, I think it could have been fleshed out a lot more, particularly in the cage fighting scenes and the climax. I don’t think it would have detracted from the fast pace of the book at all. Instead, it would have made me feel like I was experiencing what Saba and the others were experiencing rather than watching detachedly. The book ended so quickly, and with so much action, that it felt a bit like a slap in the face. And I was really angry that (view spoiler). Regardless, I still loved every second of it. Will definitely be continuing the series.