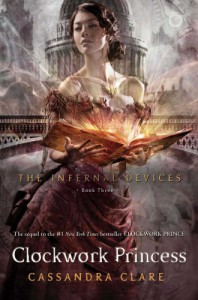 Well, I'm glad it's finally over. The end of this series was much too perfect, and almost every character got everything he or she ever wanted/hoped for. This review is going to have a TON of Spoilers, so read ahead with caution.

The series begins a few months after the events in Clockwork Prince. Tessa and Jem are preparing for their wedding, while Will tries to stomp down his feelings for her. The first half of the book was mainly a blur, with power struggles between Charlotte and the Consul at the forefront. And then FINALLY something happens. Tessa is kidnapped by Mortmain, Jem is on his deathbed, Jessamine is dead! This is when the ball really started rolling.

A lot of people have said that this is the proper way to write a love triangle. I found the love triangle in this book pretty tedious. How obvious was it that Tessa was going to end up with Will? From the first book when Will rescued her from the Dark Sisters, it has been completely obvious that they would end up together in the end. It was entirely too predictable. It was literally a re-write of the situation in the Mortal Instruments series with Clary, Jace and Simon. And then, of course, miraculously, a cure is found for Jem, and he is human again, long after Will has died! So Tessa gets to be with both of the men she loves/loved. I might just be bitter, because I was always rooting for Jem, but I thought this was altogether much too tidy and suited to please each and every reader.

In terms of love interests in the story, I also felt like everybody was neatly paired off. Cecily and Gabriel, Gideon and Sophie (my favourite couple by far), etc. Even Henry survived being snapped by an automaton! Not that I would have wanted to see him die, but there was a serious lack of heartbreak in this novel compared to the others.

To add to the perfectness (is that even a word?) of this story, Sophie gets to Ascend and become a Shadowhunter (which I was pleased with), Charlotte ascends to the position of the Consul, and agrees to break the law so that Will and Cecily can visit their parents in Wales.

One of the things I really loved about this series was Henry's inventions and how he is the one who came up with a lot of the cool gadgets we saw in the Mortal Instruments series. I also enjoyed Mortmain as a villain. His background story was interesting, and finding out more about Tessa and how Mortmain created her was also interesting. The fact that Mortmain was a step ahead of the Shadowhunters at every turn made for an interesting plot, especially when he had their hands tied closer to the end.

I think if I had read this book when the Mortal Instruments came out, I would have been much happier with the way everything was neatly tied up. As it is, I could have used with some more heartbreak and devastation, but that's just my personal opinion.