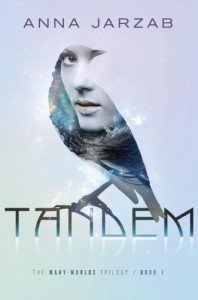 So I did manage to finish this book before NetGalley archived it. And I'm happy I did, because it was pretty unique. But, for some reason, I didn't love it.

Tandem is a story about parallel worlds. Sasha is a normal girl living on Earth, just minding her own business. But her 'analog' (kind of like a double) is a very important person in her world. Suddenly, Sasha is uprooted from Earth and forced to play the part of a princess who has somehow gone missing.

When I think specifically about what I didn't like about this book, there's nothing that jumps out at me. And that's the problem I have with it. There was no one scene, character, or plot twist that made me invested in this story. That's not to say that it wasn't good, just that it wasn't memorable.

In terms of characterization, these characters didn't necessarily conform to the tropes we currently see in YA writing. For example, Sasha doesn't slut-shame, she doesn't believe that she's ugly when everyone else thinks she's beautiful, etc. But at the same time, there was nothing about her that was striking. She was a nice girl thrown into a situation that didn't change her countenance all that much.

The supporting characters were also well-written, and also not interesting. Thomas, the love interest, was a nice guy with no abusive tendencies or male dominance issues. But he also wasn't special. Nothing like some other love interests (*cough* Day *cough*) who I want to meet and marry in real life.

I did think that the plot was well done, if not transparent. By using multiple POVs, the author does't leave much to the imagination. We received too much information from Juli and Thomas, which made it pretty easy to guess what was going to happen next, or at least be unsurprised at plot twists. But it was still well-written and tight for the most part.

Overall, a unique concept that I'm sure many readers will love. Unfortunately, it just didn't do it for me.